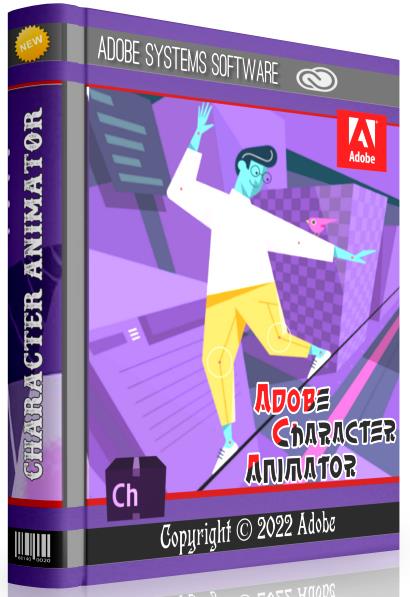 Adobe Character Animator - Animates characters in real time according to your facial expressions and movements. When you smile or nod your head, your character does the same. It happens so fast that you can even stream video animations in real time. Create a character and animate it with your own movements.

Create a character in a few seconds.
Turn any piece of art into an animated character with a webcam and the new Characterizer app powered by Adobe Sensei artificial intelligence. Create characters based on built-in character templates from Character Animator or by importing images from Illustrator or Photoshop.

Animation for legs, arms and head.
Reviving a character is not difficult at all. Control gestures (such as waving) using a keyboard or MIDI device. Movements can be saved as buttons - they are easier to remember than command keys.

• Version history bookmarks
Add bookmarks while working on a project to go back to previous versions and keep track of changes.

• And much more.
Other updates and enhancements include improved automatic speech synchronization with Adobe Sensei technology, the ability to import SVG and EPS files, improved performance, and a redesigned workspace bar.

- Automatic speech synchronization
Combine a mouth shape image with an imported audio or recorded voice to produce automatic lip sync based on Adobe Sensei. There is also an easier way to make the puppet speak: use the Nutcracker Jaw behavior to automatically move the bottom of the puppet's mouth as it speaks.

- Behavior, triggers and workflow integration
Actions such as walking, body movements, and eye contact give you control and bring your puppet to life. Triggers allow you to change your character's expressions or gestures and assign them to keyboard shortcuts. Incorporate the Character Animator project into existing animation project workflows. Bring your animation directly into After Effects or Premiere Pro via Dynamic Link, or export directly to Adobe Media Encoder.

1. Two-click installation
2. The Creative Cloud application does not litter in the system - the necessary minimum remains of it
3. All localizations included. Selection only in graphical mode, otherwise - system language
4. The original installer is used, problems with other products are excluded